In political offices, work organizations, hobby groups (e.g., choirs, sports teams), and even religious settings, we often face the reality that our leader(s) may have personal qualities that we don’t admire. So how can we follow a leader we don’t necessarily “like”?

In political offices, work organizations, hobby groups (e.g., choirs, sports teams), and even religious settings, we often face the reality that our leader(s) may have personal qualities that we don’t admire.

Personal annoying habits may range from the more trivial (personal grooming, no eye contact, bad language) to the churlish (bullying, immoral behavior, insensitivity), with many quirks in-between (does not listen well, no sense of time). These foibles may be mere distractions that interfere with a leader’s ability to lead, or they may be devastating deal-breakers that cause leaders to lose all credibility and ability to impact.

While good leaders recognize and work to overcome their weaknesses, some leaders persist in vexing followers by continually behaving badly, even if they deliver favorably.

Interested in learning more about our Leadership Development practice?

Leadership admiration often has two dimensions: policy and personal. Policy is more about what the leader delivers—results, outcomes, and institutional practices. Personal is more about how the leader behaves—style, mannerisms, and habits. The following grid captures four options for following a leader based on these two dimensions. We can all probably name leaders we know who fall within each of the four cells. 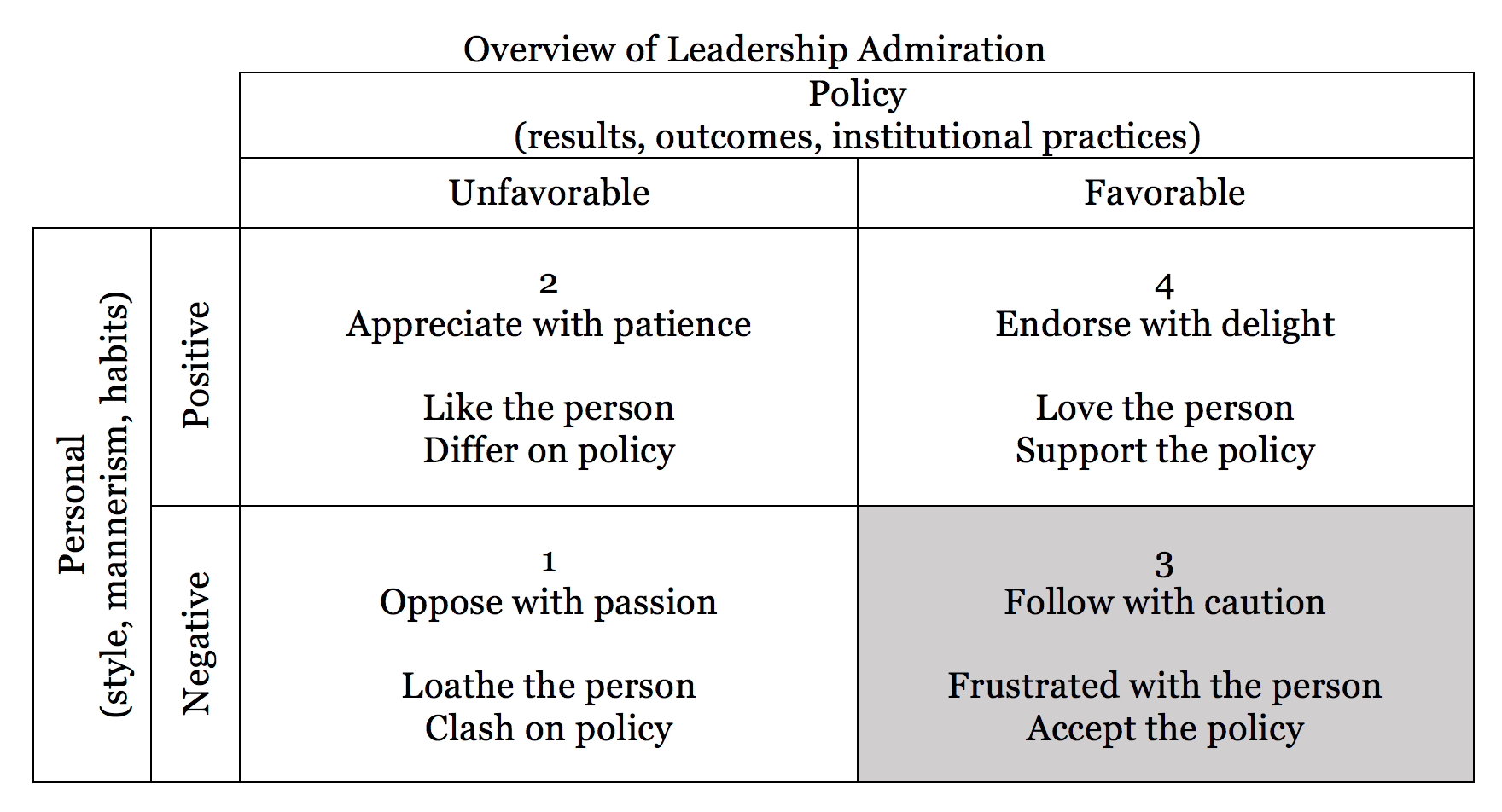 Cells 1, 2, and 4 offer relatively clear actions for followers. In cell 4, followers endorse the leader with delight as the leader and his or her policy meet expectations. No friction; no problem. In cell 1, followers are opponents who either leave or defy with passion. Cell 2 may be a little more complicated since I may not like what you deliver (e.g., miss goals or focus on policies I don’t fully support), but I like who you are as a person (we get along, I admire or share your values). In these cases, followers often give their leader the benefit of the doubt and a second chance because the leader has earned goodwill points through moral behavior, personal charm, or charisma.

But cell 3 often causes the greatest angst for followers (as well as those charged with building leadership in their organizations) because they are often committed to the outcomes and policies, but may struggle how leaders act to make these outcomes happen. For example:

So how does someone follow leaders even when the leaders may exhibit bad behaviors? I see three options: ignore, leave, or stay with caution.

Sometimes followers simply ignore the bad behaviors, pretend they don’t exist, or compartmentalize them. This “ignorance is bliss” to bad leader behaviors may offer short-term solace but does not really last if the leader continues to exhibit the bad behaviors. Head-in-the-sand followers blindly follow and may never know where they are headed or if they ever arrive.

There may also come a time when followers move on and leave because bad behaviors are so egregious that they overshadow any favorable policies or outcomes. When the behaviors are blatantly illegal (e.g., a leader who abuses employees or commits other criminal acts) or contrary to fundamental personal values (e.g., a leader who continually violates followers’ standards), a follower may choose to leave. Many have asked me, “When do I know it is time to move on?” and my answer is “There is no clear answer; you will just know by listening to your inner voice telling you the time is right.” This personal protest of moving on often is a very subjective decision since the follower may have nowhere else to go to receive the desired favorable outcomes, and by leaving, the follower has no lingering influence on delivering future results.

Hopefully between ignorance and moving on, followers can find ways to follow with caution. Let me offer two tips to do so.

As children we often idolized our parents. Part of adolescent individuation is coming to accept that our parents are both good and bad. Leadership idealism also exists where followers are awestruck with leaders but then recognize the reality that all leaders have strengths and weaknesses. One of my favorite Seinfeld episodes is where Jerry meets and falls quickly in love with a woman who looks, thinks, and acts exactly like himself, only to realize that such ideation can’t sustain a relationship. Followers who realistically see their leaders’ strengths and weaknesses can make conscious choices about what and when to support, overlook, and temper leader behaviors. Followers can compartmentalize leader behaviors so that one flaw is not necessarily fatal. It’s like a string of modern Christmas tree lights where if one light goes out, the entire string is not defective. We can still follow leaders who may have one poor quality out of many good ones. In fact, we often learn more about our personal leadership from observing leaders not like us.

Sometimes a leader’s bad behavior triggers an unconscious bias in the follower. When we grow up, we often develop unconscious biases that show up in how we relate to others, including our leaders. One of my friends had a parent who was frequently critical; another friend’s father left her mother for another woman. These early experiences created hyper-sensitivity to leaders who bullied or acted immorally. Followers sometimes project onto their leaders’ unconscious biases from their past and when leaders exhibit these biases, their response may be less tolerant. By recognizing the biases, followers can put their personal responses to leaders’ behavior into context.

It’s much easier to support leaders in cell 4 whom we can delightfully follow, or even in cell 1 whom we can vehemently oppose. We can even follow leaders in cell 2 as we appreciate their personal qualities and await with patience their moving to policies we consider more favorable.

There is a measure of peace about gaining clarity about those inevitable and awkward times where we agree with most of the policies but struggle with the person. In these instances, we must manage an agonizing trade-off of whether to ignore, leave, or stay.

So, how do you deal with this difficult followership situation?

Alongside my colleagues at The RBL Group, we help leaders align their company's brand identity with leadership brand, employer brand, and a high performing culture. To learn about our Leadership & Talent Development programs and events worldwide, click here.